Every eligible adult in England has now had the chance to get a life-saving COVID-19 booster, as the government and NHS hits their target to offer the top-up jab to those aged 18 and over by the New Year.

On 30 November, the government set out its ambition to offer all eligible adults the chance to get their top-up jab by the end of January. In response to the emerging threat of the Omicron variant, the target was brought forward by the Prime Minister and the NHS through the national Get Boosted Now campaign, to protect the public as quickly as possible – with the aim of offering all eligible adults a booster by the New Year.

The campaign led to a huge increase in vaccination rates, with over 8 million top-up jabs administered in just over 2 weeks in England (a 45% increase), between 12 December when the Prime Minister set out the new ambition and yesterday (Thursday 30 December). The NHS in England has broken record after record in that time – including the highest number of vaccinations ever recorded in a single day: 830,000 top-ups reported on Saturday 18 December. This was also the day the UK hit over one million vaccinations in total, including first, second, third and booster doses – jumping from 928,000 the previous day.

More than 28.1 million people in England – more than 7 in 10 of eligible adults – have now had their booster following the rapid expansion of the vaccination programme over the last month. This includes around 90% of those aged 50 and over who are eligible.

The COVID-19 booster vaccination programme has been a historic national effort for both the NHS and the public, with tens of thousands of volunteers stepping up to support NHS staff and thousands of people queuing up to secure the protection for themselves and others. This week, the NHS ensured over 1.5 million appointments were still available between 27 December and 3 January, allowing anyone eligible who hadn’t yet had the booster the opportunity to book their appointment. For anyone who hasn’t yet come forward, hundreds of thousands of appointments remain available to book between now and Monday 3 January with millions more slots available beyond 3 January.

Some eligible people may not have been able to receive their booster yet due to catching COVID-19, as the majority will be required to wait 28 days following infection before receiving a booster.

To meet the ambitious target and ensure the country was offered protection against the new variant, the COVID-19 vaccination programme was accelerated and scaled up significantly over the past month. This included:

The dose interval between the second dose and booster dose was also reduced from 6 months to 3 months on the advice of the independent Joint Committee on Vaccination and Immunisation (JCVI) – with booking made available one month in advance.

The UK’s booster programme is one of the fastest in the world, as the second country in Europe – after Iceland – and third in the world for the number of boosters per 100 people in the total population. 33.5 million top-up jabs have been administered in the UK in total, as well as 51.7 million first and 47.4 million second doses.

This follows a record festive period of vaccinations in England. Vaccinators were working at sites up and down the country to give people their boosters over Christmas. More than 214,000 jabs were reported across Christmas Eve, Christmas Day and Boxing Day, including 184,445 boosters.

All eligible adults can get the jab by booking online through the National Booking Service or by visiting their nearest walk-in vaccination centre. 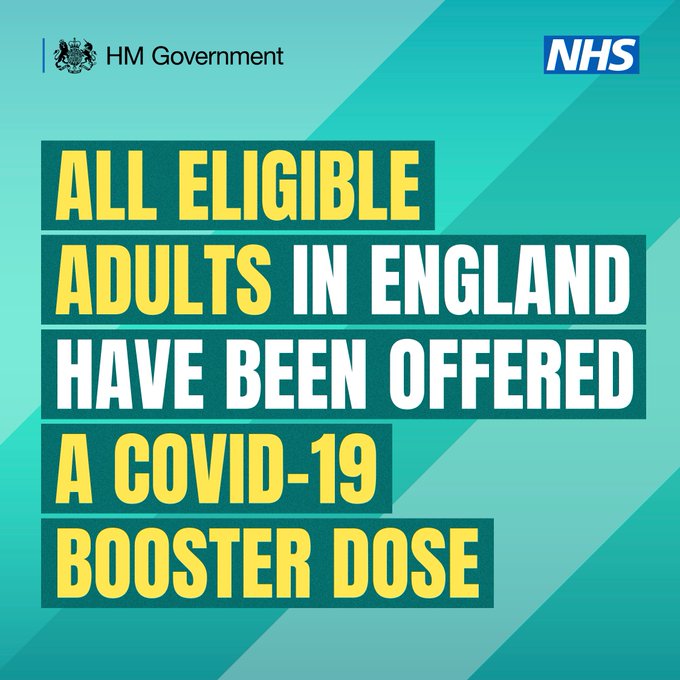