North Swindon MP Justin has paid trubite to Sir David Amess MP, who was killed during a constituency surgery in Southend on Friday.

Sir David had been an MP for nearly 40 years, having been elected to represent Basildon in 1983 and Southend West from 1997.

He was highly respected across Parliament, renown for his kind nature and sense of duty to the people he represented as an MP.

"There are no words. Yet again the best pay the ultimate price.

His passion, joy, and warmth in Parliamentary duties always shone through.

Like Jo Cox, he was a good-natured and thoroughly decent person, someone the community people could approach.

I’ve known him for many years as a parliamentary colleague and he was so good-humoured, kind, helpful and entertaining.

The way he used the end of term debates to literally raise any issue any resident had ever flagged with him in the preceding months was an absolute joy to watch.

He wore his passion on his sleeve and he had that unique way of linking his community to how parliament worked.

I’m just at a loss for him and his family and it’s such a shock.” 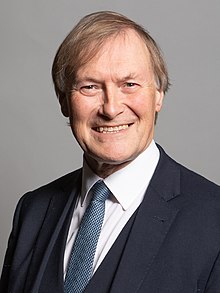