North Swindon MP has welcomed the news that the Honda site has been sold in a deal which will bring £700million of investment to Swindon.

In February 2019, Honda announced that it would be closing its Swindon factory in South Marston due to a restructure of its global manufacturing network and increased focus on electric car production.

On Friday the news broke that Panattoni, Europe’s biggest developer of industrial and logistics facilities, had brought the site, promising to spend £700m once it takes over in spring 2022.

Justin Tomlinson said: “I want to pay credit to those who have been actively involved with the Honda Taskforce, which initially sought to identify and support all those impacted by the news of Honda’s closure, and then to actively promote the site to potential new owners. The Taskforce brought together the Government, Swindon Borough Council, Swindon & Wiltshire Local Enterprise, business, staff & community representatives. Everyone has played their part.

I also want to pay specific credit to Swindon Borough Council. Yet again, they have shown a willingness to work and engage with potential developers. It is no coincidence Panattoni chose Swindon, after such a positive experience developing the nearby Symmtry Park.

The £700m investment will deliver a mix of employment opportunities as the site is developed after Honda leave later this year. I will work with Swindon Borough Council to make sure the planning and infrastructure investment is in place to accommodate the changing use of the site. 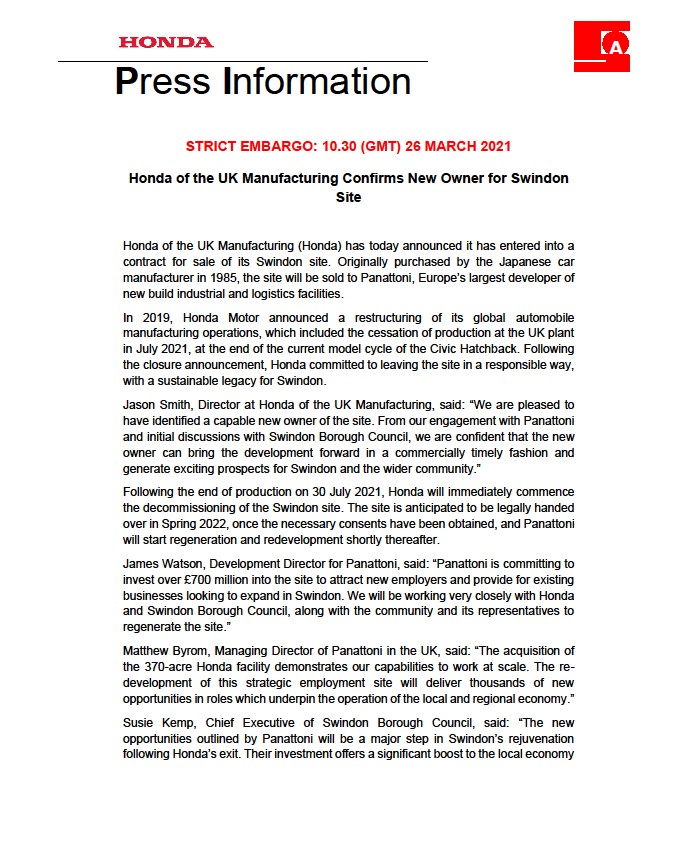