The latest round of announcements as part of the UK’s 25 Year Plan for the Environment have been praised by North Swindon MP, Justin Tomlinson. The announcements come as welcome news for jobs and the environment and form a part of the Prime Minister’s Ten Point Plan, to drive forward the Government’s green aspirations for the UK.

As part of these latest announcements by the Prime Minister and George Eustice MP, the Secretary of State for the Environment, Food and Rural Affairs, thousands of new green jobs are expected to be created, part of the UK’s wider blueprint for a green industrial revolution and making the road towards net zero possible. New national parks will also be established as part of these developments, and existing areas of natural beauty to be given greater environmental protections under law.

Following consultations with climate change experts, the Government is investing £40 million into the Green Recovery Challenge Fund, which will award funding to environmental charities or projects and partners across England whose goals are to restore the natural environment and make progress on the UK’s ongoing work to address the twin challenges of biodiversity loss and climate change.

Throughout his time as MP for North Swindon, Justin Tomlinson has championed action on the environment in a number of important ways, including but not limited to; net zero by 2050, reforesting or rewilding substantial areas of the world, air pollution, mismanagement of waste (including single use plastics) and protecting endangered species, such as through the Governments tough stance on the ivory trade.

The North Swindon MP said the following: “I welcome these announcements today by the Prime Minister and DEFRA, as a clear commitment to the Governments ambitious plans to protect the environment, both in terms of its work internationally, which of course cannot be understated, but also leading by example at home. It is only through action now with our determination that we can go net zero by 2050, help improve biodiversity and combat the effects of climate change.”

“As we build back greener we’re taking new steps to expand and enhance our landscapes - creating and retaining thousands of green jobs in the process which will be crucial to my Ten Point Plan for delivering a green recovery.

Britain’s iconic landscapes are part of the fabric of our national identity – sustaining our communities, driving local economies and inspiring people across the ages. That’s why with the natural world under threat, it’s more important than ever that we act now to enhance our natural environment and protect our precious wildlife and biodiversity. These measures mark the next steps in delivering on the government’s 25 Year Environment Plan commitments and its pledge to protect 30% of the UK’s land by 2030.

Combined, the new plans to safeguard the natural environment will extend protections of land by 150,000ha in England towards the government’s goal of protecting and enhancing an additional area of over 400,000ha.” 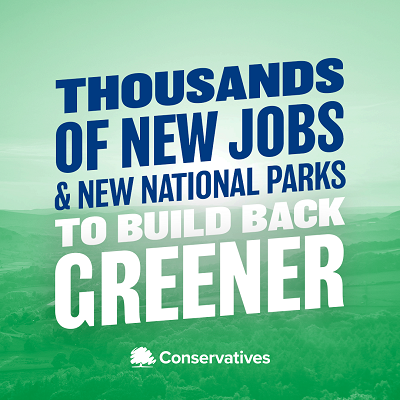