New figures released today show the EBSS successfully provided a £66 discount for 97% of eligible households in England, Scotland and Wales in its first month.

This is the first payment made through the EBSS since it launched in October and will see households receive a £400 discount on energy bills paid in 6 monthly instalments. The second instalment of the EBSS will reduce households’ November energy bills, which brings the total amount spent on the scheme so far to £3.8 billion.

Vouchers were sent to all 2 million customers with traditional pre-payment meters. The government today urged consumers to redeem vouchers as soon as possible, after figures showed only around two thirds had already done so. Suppliers will tell customers where to redeem them, for example at a Post Office branch or a PayPoint shop. Payzone outlets are unable to accept the vouchers.

From December onwards, the amount discounted from energy bills will increase to £67 as the scheme continues to provide support to households over the winter months.

Administered by energy suppliers, the scheme is designed so customers receive the rebate in the same way that they pay their energy bills, such as via direct debit, credit, smart meters and traditional prepayment meters. For the small minority who have not yet received the discount for October, this was down to factors such as issues around a customer’s bank details where they pay via direct debit, and customers on pre-payment meters who are yet to redeem the vouchers.

Earlier this year, the government introduced new powers that mean intermediaries, such as landlords, must pass on savings made under the EBSS and other energy support schemes to end users, who don’t pay their energy bills directly, for example tenants.

Those on traditional prepayment meters are sent monthly vouchers by their supplier via text, email or post with suppliers having contacted customers in advance of the scheme launching to advise how the discount will be applied.

Vouchers expire after 90 days to ensure it helps people over the winter months but can be reissued by the supplier on request. Suppliers must make several attempts to contact customers who have not redeemed their vouchers, with the scheme also allowing for consumers to transfer EBSS payments from electricity meters to gas meters. All vouchers must be redeemed by 30 June 2023.

The EBSS comes in addition to wider government support to help households with the cost of living this Winter. As well as discounts provided through the EBSS, the government’s Energy Price Guarantee (EPG) will save a typical household around £700 this winter, based on what energy prices would have been under the current price cap – reducing bills by roughly a third. The EPG will continue to provide support for another 12 months from April 2023, and with energy prices forecast to remain high, this equates to an average of £500 support for households in 2023 to 2024. An additional £1,200 of support in direct payments is being provided to vulnerable households this year, with £26 billion worth of targeted support to help protect the most vulnerable announced by the Chancellor for the next financial year. 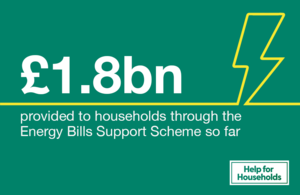