Shakespeare described the earlier Queen Elizabeth as a “pattern to all princes living,” and this week King Charles has suitably said the same of his late mother, Queen Elizabeth II.

It has been a loss felt so personally by so many. She was a grandmother figure for the whole nation. A symbol of stability. A constant throughout so much of our lives. An infectious smile that had the ability to put anybody at ease. And a sharp wit & down to earth nature which made her so loved by millions.

At the exceptionally young age of 21, the then Princes Elizabeth declared that she would dedicate her life to public service. A promise she fulfilled to the very end – seeing in the new Prime Minister as the constitutional head of state just days before her death. Throughout her reign she worked diligently and took her role incredibly seriously. She always went through every official paper that was sent to her every single day in her Government red box. And she was always ready to play her important diplomatic role on the world stage as she met with world leaders and global figures, many of whom have paid such warm tributes in her memory.

She must have gone on thousands of visits across the country & world during her long reign. Whether it was a community centre, a school, a hospital or a church hall; she treated each one with enthusiasm and importance.

Throughout the week people have been sharing their personal memories of the Queen. In Swindon, I have enjoyed looking at old photos of many of the Queen’s visits to Swindon including to Steam, the former Motorola building & Gorse Hill Primary School. In each and every recollection there is a shared joy.

Sadly, my dear friend Roy Heather also passed away last Thursday, which reminded me of his fondness for the Queen. I had been asked to recommend two people for tickets to the Queen’s Garden Party and I chose Roy and his wife Freda after their years of voluntary work for Swindon Supermarine FC. Knowing how much Roy both loved the Royal Family and a good joke; I couldn’t resist teasing him first. Just before I offered him the tickets, I told him that he could have them despite him not liking the Royal Family. In response, I almost had to scrape him off the floor! I then listened to the very long list of reasons that he loved the Queen and the Royal Family, all with a big beaming smile. He was so excited when I offered him the tickets, though it came at a price – with many weeks of hat shopping with Freda before the big day!

In my formal role as an MP, I have been honoured to attend both the presentation of addresses by both Houses of Parliament to King Charles III in Westminster Hall as well as Swindon’s proclamation of the King on Sunday. Up and down the country, events such as these have been honouring our late Queen and also showcasing our democracy & constitutional monarchy at its very best.

We will continue to mourn together as a nation and demonstrate our endless gratitude to the Queen’s dedicated & unwavering commitment to public service. May you rest in peace. God save the King. 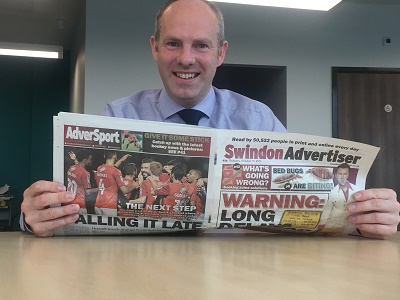