Throughout the COVID-19 outbreak, we have seen people really step up and support their communities. People across the UK have been volunteering in all sorts of ways - making meals for key-workers, delivering groceries to vulnerable people, and finding ways to cheer people up through the current challenges.

In Swindon we have seen people go above and beyond to help their neighbours and people in their communities, and I wanted to make sure their efforts are recognised. Last week I asked people to Community Champions who they wanted to thank and celebrate. Below are the people who have been nominated - I am very proud that Swindon is home to such generous and positive people.

As part of National Volunteers' Week, which celebrates and recognises the contribution millions of volunteers make across the UK, I asked people to nominate those who have done fantastic work to support their communities. Here are the nominations I received:

Congratulations Raj Patel (known as Sunny Bhai) from the QMS store on Ferndale Road, you were nominated by Emma Hill, Barbara Sheppard, Ann Hoskins- they said:

“He has supported the vulnerable throughout this pandemic with meals (for free) and groceries etc. He has worked relentlessly and has made a huge commitment to the community”

“He's been such a caring and generous man throughout the lockdown period.”

“We have quite a few elderly and vulnerable adults in and around Southbrook Street and Ferndale Road. Suny has gone above and beyond being a local store owner. He has supplied masks to the elderly, he has every night supplied and delivered free of charge a hot meal to those who have needed it.”

Congratulations to the Blunsdon Village Shop, you were nominated by Colin Scott – who said:

“Shop staff members will cheerfully take a telephone order, no matter how small, and deliver it to our doorstep the same day.”

“They have donated all the groceries and containers, prepared the vegetarian meals and packed in individual portions for distribution.”

Congratulations Mr Nagajan Duda Karavadra, you were nominated by the President of the Hindu Samaj Swindon Mr Siddharth D Patel, who said:

During the current pandemic emergency, our NHS and other vital services have been under severe pressure.

Despite their own Health and safety concerns and with strains on PPE availability, they have done their duty tirelessly. The community has shown its gratitude in many ways.

Mr Karavadra and his family have selflessly worked hard during this period to provide over 1000 fresh meals to the frontline workers in Swindon.

They have donated all the groceries and containers, prepared the vegetarian meals and packed in individual portions for distribution.

Both his daughters have delivered the meals in time for lunch on many days to the frontline staff at the Hospital, Police station, Fire Brigade and Salvation Army. The photographs below show them in action.

Mr Karavadra has also donated grain and basic everyday necessities to the needy in his home town in India during this pandemic.

This selfless service, we call 'SEWA" in Hindu tradition, is what Mr Karavadra and family are known for and we feel that he/they deserves to be recognised, especially in the difficult times that we all are in currently.

His goal in life is offer SEWA and to look after the welfare of the needy.

Congratulations to the Hindu Samaj Swindon, you were nominated by Mr Karan Vohra

Hindu Samaj Swindon recognised the difficulties facing many homeless people, and people who struggle to meet the demand for food. The group appealed to it's members, asking them to donate money. In total, Hindu Samaj Swindon raised £3,000 in just over a month.

Congratulations Damian Pickett, you were nominated by Cllr Steve Heyes – who said:

“During Covid he has hosted two quizzes a week on Facebook - ine for children and one for adults. He has put a lot of effort into the Quizzes and and they have certainly lifted the mood. Damian has done exactly the kind of thing that has been beneficial to the mental health of residents and played a part in bringing people together”

“There was recently an article in the Swindon Advertiser regarding his exploits running around North Swindon whilst wearing a Spider-Man costume, putting a smile on the faces of children and adults alike. He has also made special stops on his running routes to drop off birthday cards to children. He informs the local area when he will be running via the local Facebook group and invites people to let him know if they would like him to visit their address/street.

In addition to helping people to stay positive he always emphasises the need to follow government guidance regarding COVID-19 and so he is also helping to remind people of the importance to stay home and maintain social distancing. I believe his partner and his daughter also work in the NHS so it must be a worrying time for him. If that’s not enough, sadly his mother passed away recently as well and yet he has continued with his running exploits.”

“I became aware of Andrew's commitment to the local area just as the lock down period started. Andrew started running in costume to push the message home to stay inside.

As time went on, Andrew now shares his planned run so young children can look out for him from their homes. Also, he is happy to share birthday wishes if there is a young person celebrating a birthday, and he has hand delivered a Spiderman card to the birthday child....how delightful is that particular at a time when the world is a little mad, that someone takes the time to brighten a young person's day! I just think this needs to be recognised and celebrated.”

“Andrew started dressing up in superhero fancy dress while doing his daily exercise at the start of lockdown, to make people smile and also to acknowledge the real Superheroes getting us through the pandemic.

This has since developed into a socially distanced event that cheers up young and old alike. Andy asks anyone who has a child with a birthday who would like a visit from Spider-Man to send him their address, he writes them a card and delivers it from a safe distance. Some of his runs have had so many card drops and requests to run past and wave, that he ends up doing over 12 miles!

He posts videos with motivational messages, reminding people about doing the right thing and staying in to help the NHS.”

Congratualtions, Tajwar Hassan and Gillian Stokes, you were nominated by Uzma Anwar – who said:

“I would like to nominate their charity organisation, which is connecting communities. They have been doing an amazing job looking after people during the pandemic.”

“Magnus thought up the idea to cook for and feed the elderly and vulnerable around Stratton, when the lockdown started. He is chairman of Stratton Juniors Football club and started with help from his football coaches and volunteers with donations from very kind people. The meals are delivered by the volunteers along with a drawing with each meal provided by the football club junior members.

“When the Covid 19 crisis hit he had to mothball both his companies but made sure that everyone who worked for him was not in hardship. He then, along with the secretary of the club Paul Surridge, started cooking and organising deliveries of cooked meals to the elderly and vulnerable members of the Swindon community - which has now reached 85 people throughout the Swindon Community. He Never seeks personal gain from any action he does. I am really proud of him and I am one of the 10 volunteer drivers made up of coaches from the club.”

“Magnus has gone above and beyond during the pandemic. After having to close his business due to COVID 19, he and his team at Stratton Jr's football club have volunteered and delivered fresh hot cooked meals to numerable people. They have been delivering as many as 85 meals a day.”

“He's done this completely off of his own back and for the want to continue to help people in any way that he can.”

Congratulations to The Heart in Hand Pub in Blunsdon, you were nominated by Mr Colin Scott – who said:

“In these very austere times for publicans they have taken to producing takeaway food. For critical cases like ours, Steve will gladly deliver cooked food, piping hot, to our doorstep”

Congratulations Tim Saint, you were nominated by Anne Giles – who said:

“Tim works 12.5 hours per week with us at Swindon Carers Centre but in his own time he has volunteered to deliver donated chocolate Easter eggs and Birthday cakes to our carers and schools which have been open in lockdown.

He has delivered 62 birthday cakes to older carers who have had milestone birthdays, and to some carers' dependants, vulnerable people, people shielding, and some sadly bereaved carers and some parent carers too.

He has also fixed up a bike and delivered it for a young child who's bike broke and the parents couldn't afford a new one.

This is how many people Tim has made smile and feel recognised, valued and supported during this lockdown.

Tim volunteers to do this in his own time unpaid and does not claim expenses for mileage.”

Congratulations Ranjit Sihra, you were nominated by Harpreet Sihra - who said:

“In April she set up a Facebook group to start sewing PPE to give to NHS and front-line workers. She used her own materials and equipment to make items such as the masks to give to free for those in need.

The page has since gained hundreds of members and others have started to help her with the huge demand of PPE.

She has provided PPE to several care homes in the area and further away, Great Western Hospital and to many care-workers and vulnerable children in Swindon.

The demand has increased rapidly but she has still managed to keep up with orders by starting sewing at 5am some mornings! She does not realise how many people she has helped by starting this Facebook group off but honestly so many people appreciate the help she has given.

It is not the first time that she has gone above and beyond. When she was diagnosed with cancer in 2016 she started sewing drain bags for women who were having breast surgery after cancer. Again, she made these on her own for free and sent them out all over the UK and even abroad.

She has managed to raise funds via Facebook to help her and those in the group to continue to make masks, scrubs and hairbands. All donations (100%) go towards new materials such as elastic which has become so expensive since the Coronavirus. All PPE made for NHS and frontline workers are given away free of charge.

I think it is so impressive that she has been doing this, especially as her cancer treatment only finished a month or so before we went into lockdown. She always puts others first and never complains, and to me that is a true hero.”

Congratulations Blunsdon Doctors Surgery, you were nominated by Mr Colin Scott – who said:

“The receptionist is Mrs Helen Pavely, There are two lady pharmacists, Julie and one other I am able to order both of our repeat prescriptions online, and one of these very helpful ladies delivers the medication to our doorstep, twice a week. This is over and above the standard call of duty.” 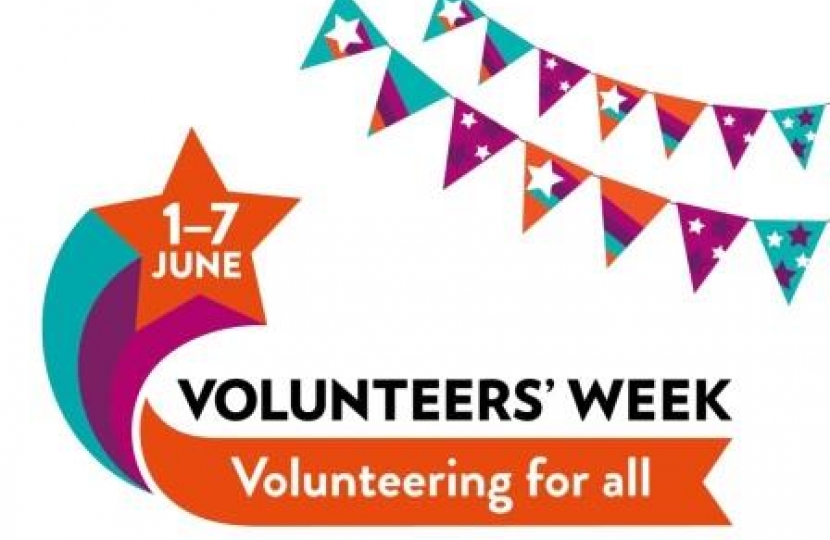