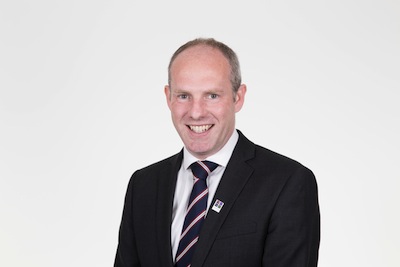 Justin was first elected as the Member of Parliament for North Swindon in 2010.

Justin was born in Blackburn in 1976 before moving to Kidderminster where he spent his childhood. He attended Harry Cheshire High School, a state comprehensive that was consistently bottom of the league tables and has since been amalgamated. Justin’s father sadly passed away when Justin was aged 12; an event that he says inspired him to work hard and strive to make a difference.

He left Kidderminster to attend Oxford Brookes University where he obtained a degree in Business, as well as being Chairman of the Conservative Party’s student branch from 1995-1999. After graduating, Justin moved to Swindon where he became a nightclub manager at Eros before becoming a local businessman, owning and running TB Marketing based in Stratton.

During this time, Justin began serving as a local Councillor for 10 years, representing the Abbey Meads ward (now split across the Haydon Wick, St Andrews and Priory Vale wards), before standing down to become the North Swindon MP in 2010. During the 10 years Justin was a Councillor he had a 100% attendance record and never claimed a penny in expenses.

Whilst on Swindon Borough Council, Justin served 4 years in Cabinet as the Lead Member for Culture, Leisure & Recreation.  During this time he chaired a number of key projects:

•    The new £10m central library, delivered on time and on budget.

•    Invested in a variety of new leisure facilities across the town's leisure centres.

Justin first ran for Parliament in 2005, where he cut the sitting Labour MPs majority from 8,100 to 2,500 – one of the largest swings in the country in that year. He followed this in 2010, again securing a swing of 10.1%  to overturn Labour’s majority in North Swindon, securing himself a 7,060 majority and becoming the MP – the first local resident to win the seat.

As a result of his election to Parliament, Justin sold his business and stood down as a local Councillor in order to fully concentrate on his role as MP. During his first term Justin was voted the 3rd most helpful MP out of 650 in terms of dealing with local issues and residents’ casework, in 2019 this was improved to being 2nd out of 650 MPs. He gained one of the highest voting and speaking records in Parliament and served as the Parliamentary Private Secretary to Ed Vaizey, when he was the Minister for the Digital Economy. He was also appointed by the Conservative Party as a Small Business Ambassador.

He also made it a priority to support local charities and organisations, raising over £150,000 so far.  These include:

Following this victory, Justin commented “being re-elected as the MP for North Swindon is the proudest moment of my life. I am overwhelmed at the amount of support I have received from my fellow local residents and I will continue to commit myself completely to their service and represent them to the best of my ability.”

Following the General Election, Justin was invited by then Prime Minister David Cameron to become a part of the Conservative majority Government and serve as the Parliamentary Under Secretary of State for Disabled People. This new role took him to the Department for Work and Pensions where he worked alongside Iain Duncan Smith MP followed by Stephen Crabb MP. During his 14 months as the Minister, Justin made a significant contribution, his top achievements including:

•    Launched the idea of ‘Reverse Jobs Fair’ as part of the Disability Confident campaign, helping disabled people to make contact with employers

In July 2016, Justin re-joined the backbenches and was immediately asked to become co-chair of the All Party Parliamentary Group for Sport, a role which he accepted immediately and co-chaired alongside Paralympian Tanni Grey-Thompson.

At the General Election in 2017 Justin received 29,431 votes, securing a record vote share of 53.6%. In July 2018, Justin was once again asked to join the Government as a Minister within the Department for Work and Pensions (DWP), first as Parliamentary Under-Secretary of State for Family Support, Housing and Child Maintenance and in April 2019 being reappointed as Minister for Disabled People, a role Justin continues in to this day and is extremely proud of. In the 2019 December General Election, Justin won the North Swindon constituency for a record fourth time by 16,171 votes also a record for the area, 7,836 more votes than the majority at the 2017 election.

After the 2019 General Election, Justin was reappointed Minister of State for Disabled People, Health and Work. In Justin's role as a Minister of State, he has launched the National Disability Strategy, which set out 100 immediate commitments supported by £1.6bn of funding to upgrade job support and opportunities, housing and transport. Justin has also continuously worked to support people throughout the coronavirus pandemic - first with the Furlough Scheme, which supported over 8.9 million jobs at the peak; and now with the Kickstart Scheme, creating over 120,000 jobs for 16-24 year olds. Justin continues to ensure record disability employment and provide opportunities for disabled people.

Away from politics, Justin is a huge sports fan, particularly football and cricket. He regularly watches Swindon Supermarine and Swindon Town, and occasionally plays for the Parliamentary football team. He is also a fan of video games and has been involved in supporting the UK Gaming industry, championing its contribution to the UK economy. He lives in North Swindon with his wife Katie and young daughter Margot.