This was an opportunity for me to raise a number of asks from Ministers – such as, ensuring consultation on new free schools is right, and going further with the consolidation of multi-academy trusts.

I also made some specific requests relating to issues being experienced by nursery schools, including:

During my speech I also asked the Government to consider one of my long-standing campaigns to open up school community and sports facilities for any community parent group free of charge after school and during holidays.

In addition to this, I called on the Government to turbocharge its Holiday Activity and Food Programme, which supplies funding to local authorities to provide free holiday activities and food during the holidays for children on free school meals. The program is a huge welcome relief for busy working parents— and I believe we can build on this to increase capacity and provide greater choice.

I was also able to highlight a recent visit to Swindon by Education Minister Will Quince - who visited Playsteps Nursery (run by Cllr Jo Morris ), which is a great example of best practice; and Draycott Sports Camp , a popular holiday activity programme which is supported by the Holiday Food and Activity Fund.

It is a pleasure to speak in this debate. We all have a calling as MPs, and I was driven to get involved by social mobility. I went to a school at the bottom of the league tables and I lost my father at an early age, and I have always recognised that if we get this area right—the things we have all been discussing; despite the partisan speech of the shadow Secretary of State, the hon. Member for Houghton and Sunderland South (Bridget Phillipson), we are united on much of it—it can unlock potential and allow people to progress in life.

I have now served 23 years representing my community, initially with a Labour council and a Labour Government and now with a Conservative council and a Conservative Government, so I have seen both sides. Neither got it all right and neither got it all wrong, but the reality was that schools were built late under the Labour regime, and when we did get them, they were through the private finance initiative. They came with huge extra costs and were limited in their ability to meet changing demands, particularly when numbers increased.

Under our Government, we have delivered a swathe of new schools, including the new £23 million Great Western Academy—bizarrely opposed by one of the former Labour shadow Secretaries of State for Education—which is now full, and we are seeking to expand. This is making a difference to parents: 91% of parents in my constituency, in the top 10 in the country, are now able to secure their first choice school. What a contrast to when I used to have to go to public meetings to see the anguish and the anger of families who were being robbed of the opportunity to have the school they deserved to which to send their children.

As a big supporter of the free schools programme, I have some—I hope, constructive—asks. First, I think the welcome consolidation of multi-academy trusts helps with the pooling of resources, training, recruitment and career progression for teachers, but I think it should go further. When we consider large new school sites, we should look to consolidate the offerings, so that we do not just have traditional secondary schools, but perhaps have university technical college provision, grammar streams and special educational needs provision, which children can move through during their school life. Some children develop at different stages. They could stay on the same site, but move around. I have seen some examples of that on a smaller scale, and I think it has potential.

I also think, and Ministers will not be surprised by this, that when we award free school status, we must make sure we get the consultation right. There is an issue at the moment in that the schools provisionally Toggle showing location ofColumn 754awarded then carry out the consultation. We had a case in my constituency where a school was the only bidder at the time—a long time ago, before others came forward—and it decided to go against what the community, the elected representatives and the local authority wanted. It carried out its own consultation and, frankly, picked or cherry-picked which bits it wanted, and the regional schools commissioner was useless in trying to do anything about it. Our local community feels slighted by that, and we just hope that that will be reflected on and improved in the future.

I recognise that the two Ministers representing us today are fully over their briefs, thoughtful and, crucially, willing to engage. Both are parents, and I thought it was a bit of a bizarre comment earlier to say that not enough parents were speaking; I think probably most of us are parents. We have a four-week-old child who has been sleepless for a week, and I can confirm that I am definitely a parent on the back of that.

Turning to nurseries, I pay tribute to the Minister for children and families—the Under-Secretary of State for Education, my hon. Friend the Member for Colchester (Will Quince)—who in his then new role came to visit Councillor Jo Morris, a director of a number of nurseries in my constituency, where he took the time to engage thoroughly with the challenges. Again, to be helpful, I have some asks, but I first wish, along with many other speakers, to pay tribute to the fantastic nurseries and the staff who, throughout covid, were able to keep the show on the road. It sometimes felt that they were the last ones standing, and as parents we were very grateful for what they were able to do.

My first ask is about the peculiar position whereby schools offering nursery provision do not pay business rates, yet traditional nurseries do so, although most of us would recognise that they are educational establishments. The nursery that the Minister visited pays £15,000 a year. It has about 100 children, so that equates to about £150 per child. In his supremely effective lobbying of the Chancellor, will the Minister please add that one to the list?

On the broader funding point, we all support the annual increases in the national living wage above inflation, but we must also recognise that nurseries, which predominantly rely on the free provision funded by the Government, have limited abilities to increase income, and that has to be taken into account. I know there are discussions and consultations about ratios, and there are other options such as qualified ratios, underpinned by strict conditions linked to Ofsted inspections. This is a particular challenge of recruitment, and when recruitment is a challenge at short notice, nurseries rely on agencies with very expensive costs, which impacts on their viability.

I welcome the Government’s investment in speech and language development and the catch-up post-covid, but could consideration be given to allowing nurseries also to bid for some of that money, on a case-by-case basis? Without having the expertise of fellow hon. Members and friends who were teachers in a former life, I suspect that doing some of that in nursery would make a significant difference. Again, it was highlighted to us post-covid that there was a direct impact on the speech of a generation of young children entering nurseries.

Finally, hon. Members will find no bigger fan than me of school holiday after-school provisions and the holiday activity fund, which I have pushed for in debates Toggle showing location ofColumn 755over years. Indeed, I brought Mark Draycott of Draycott Sports Camp to Parliament to meet the Secretary of State for Education, who was then in a former role in that Department. The holiday activity fund is a huge welcome relief for busy working parents—nothing fills busy parents with dread more than the thought of a long summer holiday and entertaining their children—and I want the Government to turbocharge it. We can do more with sharing best practice, because the scheme is still in its infancy, and that will help build capacity to provide greater local choice.

I also want the Government to consider one of my long-standing asks about the free use of school community and sports facilities for any community parent group that is putting on constructive activities for young children. That will predominantly be sport, but it could also be scouts, guides or other activities. It seems a bit bizarre that we ask volunteers to step forward, and then charge them for the privilege.

Finally, as we consider the cost of living, it would make a big difference if we followed the German model of spreading out term times region by region, so that we dampen down peak demand for school holidays, as that would save hard-working parents considerable amounts of money. 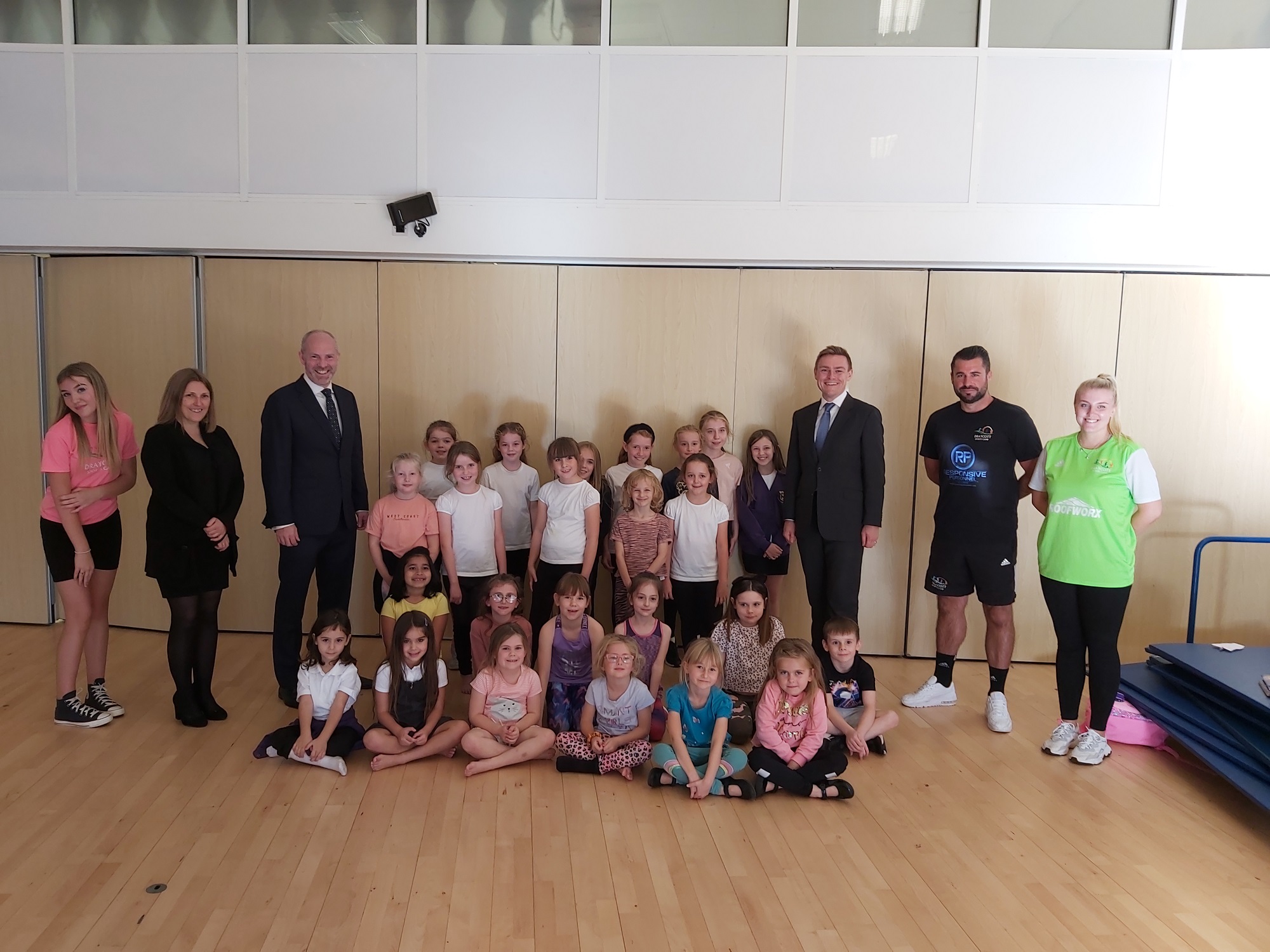